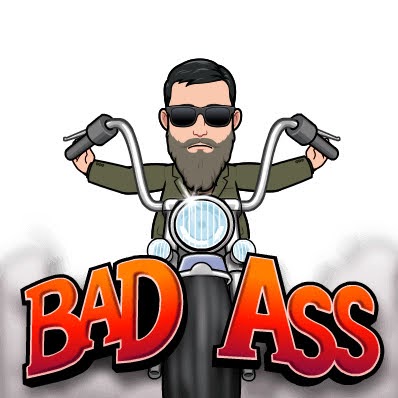 Has it really been more than a month since I posted here?
Either the stoop hasn't generated much news or I've been ... busy?
That can't be right, unless you call binge watching my latest TV obsession "busy." In this case, I've been devouring "Sons of Anarchy," the motorcycle gang drama that takes inspiration from Shakespeare's "Hamlet."  The protagonist has some serious daddy issues.

"Sons" ran for seven seasons beginning in 2008. I was vaguely aware of it while it was on, but didn't watch it until now, probably because of the strange hours I keep working as a radio newsman.

The sacrifices I make to keep food on the table.

Anyway, I just started season six, which seemed like as good a place as any to take a break and write a blog post about how the outlaw biker life has passed me by.

Honestly, I didn't even know being an outlaw biker was a viable option as a career path until I started watching "Sons." Now, I feel like I missed out on the violent mayhem of a life of crime. Youth is wasted on the young.

You know who at least looked the part of an outlaw biker?

He had the bushy, untamed beard for it anyway.

I've been thinking about Strother since last summer. And now that I'm fully vaccinated and can get out and about more widely with the peace of mind that only a certain degree of immunity can afford, I can do more than just think about him. I can start visiting the places he wrote about and illustrated.

On Thursday this week, I traveled the furthest I've been from my home in a year. I made the roughly 40 minute drive to Berkeley Springs, the artsy town in West Virginia's Eastern Panhandle where Strother maintained a second home and where his family once operated a hotel from where - as Porte Crayon (his nom de plume), Strother and his crew set out to explore the Blackwater Country of what is now West Virginia.

Unfortunately, Strother's home no longer stands in Berkeley Springs. It was torn down in the 1970s to make room for a service station. The original hotel isn't there, either. It was destroyed by a fire in 1898. The Country Inn has stood in its place since the 1930s.

Despite the disappointment of not being able to take a good look at a couple of key places as Strother saw them, my trip to Berkeley Springs was not a complete bust - far from it.

I met with Harold Michael of the Morgan County Historical Society. He brought along his laptop and, for a small fee, allowed me to transfer a trove of Strother info onto a thumb drive - including a speech Strother delivered on Independence Day in 1876 and a local newspaper account explaining why his historic home was torn down.

I'm planning to get busy following Strother around this summer. I can see more trips to Berkeley Springs in my future and other notable places where Strother made his mark, including Harpers Ferry, Charles Town and the rest of the Shenandoah Valley. I might even fish the Blackwater River as Strother and his friends did back in their 1850s heyday. I'm even thinking of putting my own crew together and hiking Mount Porte Crayon, named for Strother and the sixth highest mountain in West Virginia.

If this seems like a recipe for misadventure, I have to agree.

Rest assured, though, if I wipe out it won't be on a motorcycle.