Morning Coffee On The Front Stoop

- September 06, 2018
If you want to know what the weather has been like in my neighborhood this week, look no further than this pic. 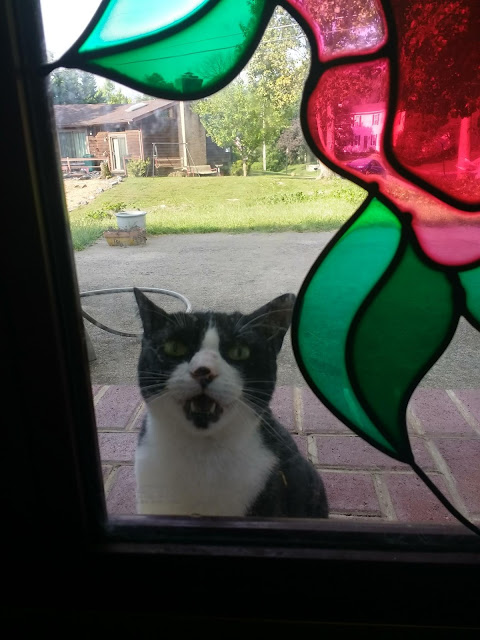 Our little tuxie insists on spending much of her time outside, but even she has her limits when it comes to heat and humidity.

In other words, you know it's bad if SHE wants inside. She was only out a short time this morning before I heard her wailing.

I was out on the stoop with her earlier, watching her keep tabs on a squirrel that eventually scampered up a tree. But I wimped out sooner that she did. It was already sticky, so I opted to retreat indoors where the AC made coffee drinking bearable. She wasn't far behind.

After today we should get some relief. Tomorrow is expected to be some 10 degrees cooler and forecasters are predicting excellent stoop weather this weekend with highs only reaching the mid to upper 60s.

For now, though, the sun is still blazing. But at least I've had much of the week off from the Washington, D.C., newsroom.

With Bob Woodward's new book coming out, yesterday's New York Times Op-Ed, Supreme Court confirmation hearings for Judge Kavanaugh and bigwigs from Facebook and Twitter on Capitol Hill, I can only imagine how steamy the city must be right now.