- April 17, 2020
Earlier this week, a friend of mine tweeted about his shoes - saying "they must be wondering WTF happened to me."

And tweeted back at him about the pair of boots that I bought just before the world turned upside down and slippers became normal home office footwear. Those boots have yet to be completely broken in.

I'm not the sort who is obsessed by shoes. The basics are generally all I need or want. I have a brown pair of dress shoes, a black pair, sneakers for walking the Ornery Dog and a pair of Crocs I wear when I feel like scandalizing my wife. Oh, and I also have a pair of sturdy work boots that I wear mostly for show. It's not like I dig ditches for a living.

But I admit it. I love the boots I bought just before things went haywire. Good thing since I paid money enough for them.

I bought them at an actual shoe store where I actually put my foot in one those actual contraptions that are supposed to accurately measure your feet.

That shoe-buying ritual took me back. When the sales clerk put his measuring device on the floor in front me and asked me to place my bare foot on the cold steel, I felt like a kid again. I could even hear my Mom telling me to "stand up straight." In any case, I haven't had shoes properly fitted in years, possibly decades.

By the way, did you know they're called Brannock Devices? After the inventor Charles F. Brannock? I suppose only serious shoe people would know that. I just googled it.

Anyway, the night before I had to take my car in for an oil change this week, I decided to dress for the occasion. And why not? After all, there's not much to dress for these days. Case in point - this past Sunday, my wife and I watched our church's Easter services in our pajamas. I may be a heathen, but there is something comforting and communal in observing traditions that go back generations, even if they are streamed on a nontraditional laptop computer.

Back to the boots.

I'm proud of them and was looking forward to sporting them for once. The thing is, though, there was hardly anyone at the dealership to notice my fine footwear. I had the waiting area to myself for more than an hour. Rather than taking compliments or at least observing admiring glances, I killed time watching the Home and Garden cable network on the flat screen and scrolling through my Twitter feed.

Right about here is where I was thinking of making a joke about service advisers being con men, but my heart's not in it. The guy who waited on me said my regular adviser, among a slew of others at the dealership, had been furloughed and that service appointments were down by two-thirds. He said they usually average 30 appointments a day. Now, they're down to just ten. There's no sense in kicking a guy when he's down.

My appointment was on Thursday, the day the government said more than five-million people filed for unemployment benefits last week alone, bringing the four week total to 22-million. My colleagues in the newsroom at NPR pointed out that nearly all the job gains in the ten years since the Great Recession have been wiped out.

When I got back home, I changed out of my boots, put on my sneakers and took Ornery Dog Jasper for a walk around the neighborhood. We were almost home when I snapped the picture that brings an end to today's post.

One of my neighbors decided to be neighborly and made a gesture of books and puzzles that finally made me crack a smile.

I'd rather be grumbling about people like my furloughed service adviser than worrying about whether they are making ends meet. 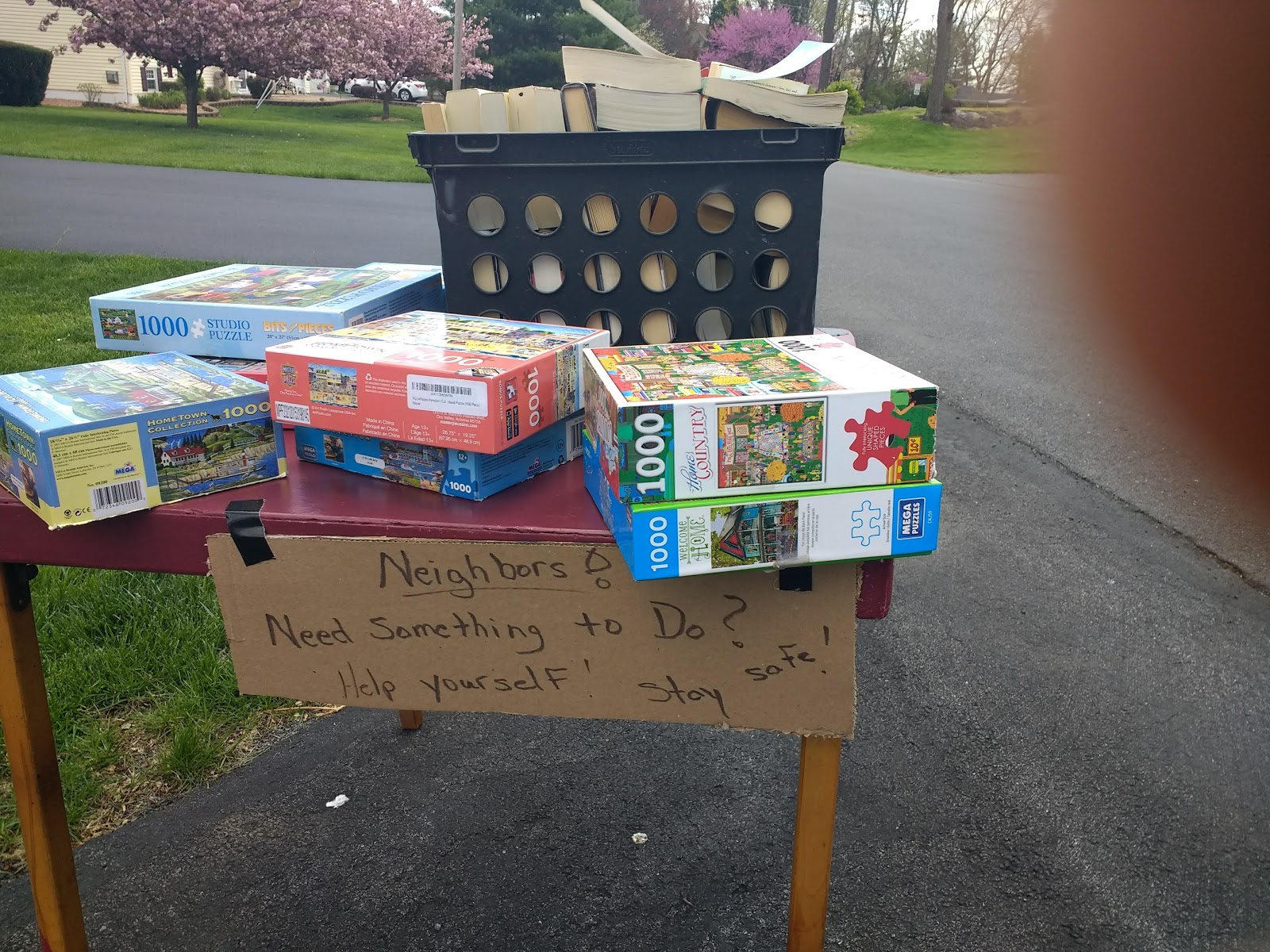