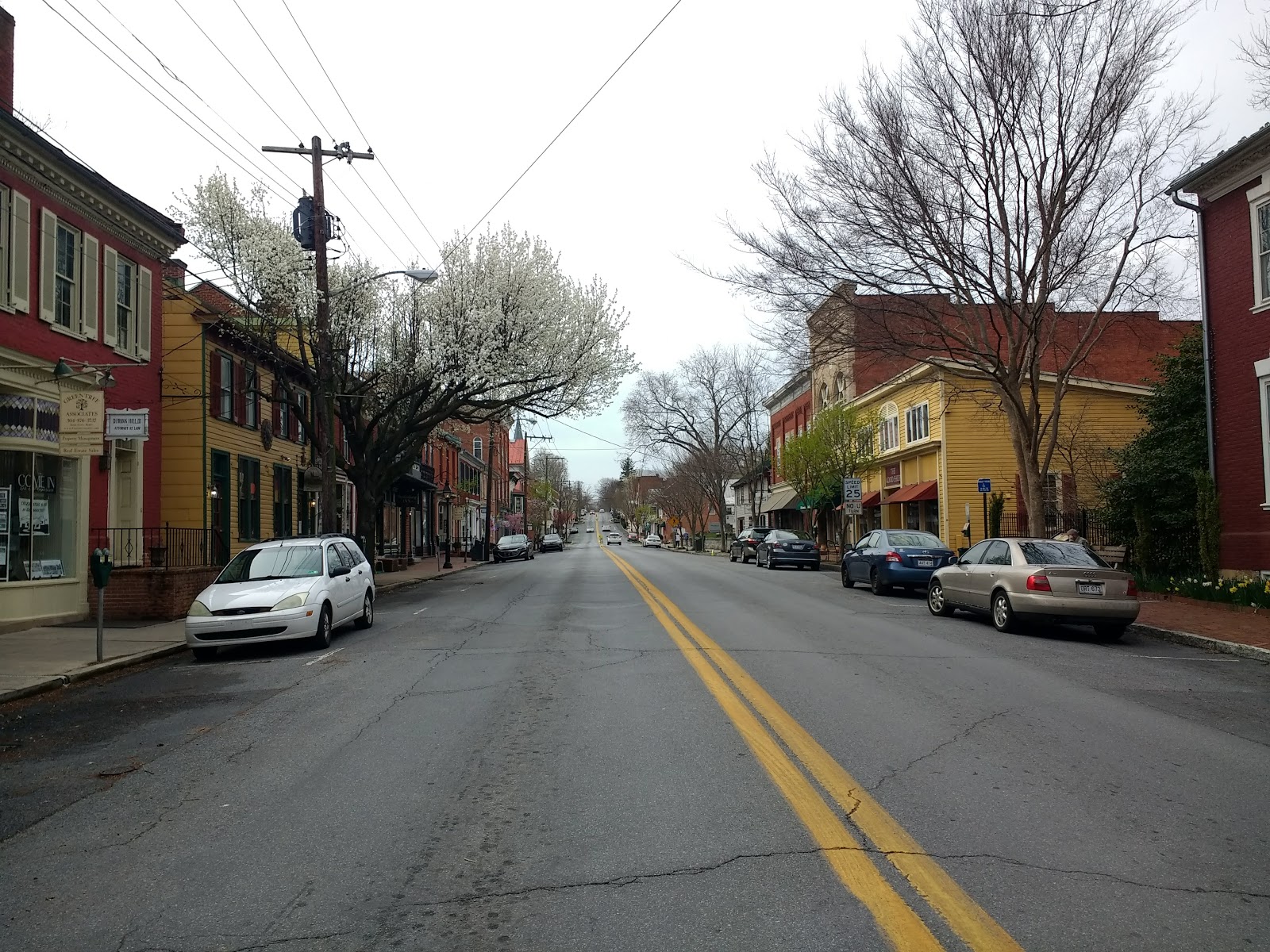 They're called "man-on-the-street" interviews. Journalists do them all the time to take the pulse of a community.

For an introvert like me, conducting such interviews is almost always awkward. I've only done them because I've had to, a requirement of the job. But the thought of engaging a total stranger in a conversation about the pressing issue of the moment makes my brain explode. That's why I packed our Ornery Dog Jasper into the car on Thursday for a quick trip over to Shepherdstown, the first town in the last state in the nation to confirm a coronavirus case.

Shepherdstown is arguably the oldest town in what is now West Virginia, having been chartered in 1762 - well before the Civil War, when the two Virginias were still one. It's where my Snyder forbears settled and eventually prospered after they came over from what is now Germany. It's a nice little town with a small university that helps keep things interesting. In fact, I consider Shepherdstown to be the source of all Snyder power. It's the Jedi home world, if you'll excuse the nerdy "Star Wars" reference.

In case you're wondering, I didn't grow up there. In the 1920s, my grandfather Snyder moved his family to Charleston, West Virginia's capital, forming another family power base on the other side of the state.

When I took my current journalism gig in Washington, D.C., it seemed only natural to resettle near Shepherdstown and commute into the city. And now, the old family home place isn't far from where I live in West Virginia's Eastern Panhandle. When I have an afternoon to kill, I like to go over there, grab a coffee at the Sweet Shop bakery on the main drag through town and sit outside - partly to people watch and but also to peek into the past, to see what those who came before me saw.

I took Jasper with me this time around because dogs are good conversation starters. There is always someone around who stops, smiles and wants to gush over a dog. He seemed like a good lure to hook people into answering a few questions. Only this time, there weren't many around.

Shepherdstown is usually bustling with people out and about and dodging into and out of its restaurants and shops. On this day though, there was only one person immediately visible. A man had set himself up in a lawn chair in front of McMurran Hall, the historic clock tower building that has long been the face of Shepherd University. I left him alone. He was reading and seemed unimpressed by the Ornery Dog.

I then walked Jasper across the street and sat down on a bench. It wasn't long before a man in a straw hat turned up. He smiled at Jasper, but seemed more intent on his errand. I left him alone. About a block away from me, a young man who could have been a Shepherd student emerged from a shop. I'll never know. He ran energetically across the street and disappeared.

A short time later my hopes rose. A young couple walked briskly down the concrete sidewalk toward me. They smiled and briefly acknowledged Jasper, but he wasn't enough to make them stop. They were too engaged in their own conversation.

I sat on the bench for a while longer before getting up to make my way back to the car, having had no luck in talking to anyone about Shepherdstown's new coronavirus status. Along the way, I passed by  the building my great-grandfather built to house the operations of his small town newspaper, the long defunct "Shepherdstown Register." There's now a taco joint on the first floor. Taped to the door was the sign of the times, informing potential patrons hungry for lunch that it was closed for the time being. 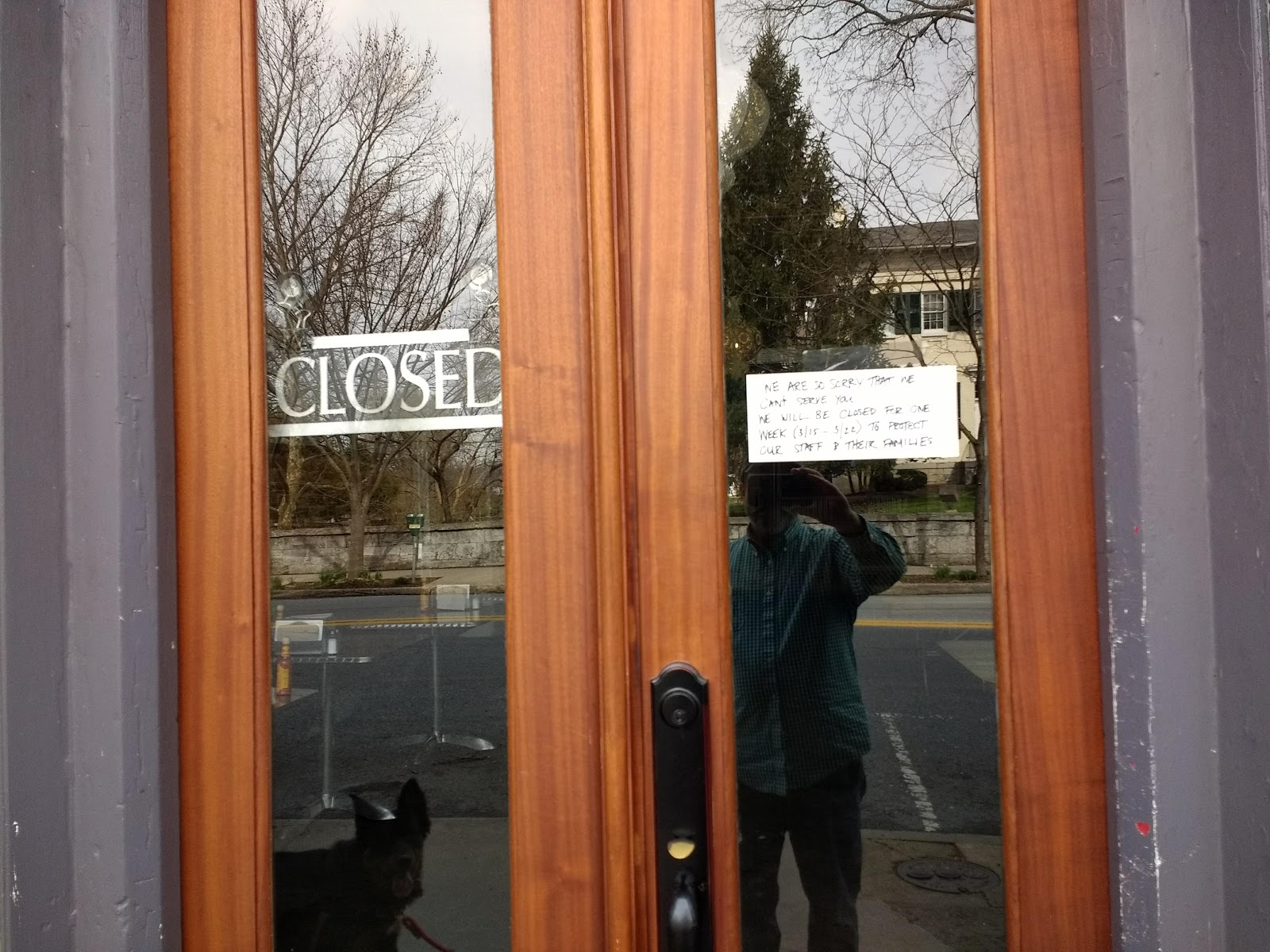 Just when it seemed my quick trip to Shepherdstown would be an exercise in futility, a man and woman turned the corner in front of me. The woman took one look at Japser, crouched down to his level and asked if she could pet him.

"Sure," I replied, pleased that someone had finally fallen into my trap. Maintaining a respectful "social distance" I asked how they thought Shepherdstown was doing.

"I'm surprised there aren't any tumbleweeds," the man replied. "I've been coming over here for 25 years. I've never seen it like this."

The woman chimed in, standing up and sweeping her left arm at a Shepherd University building,  marveling that students were nowhere to be found.

Restaurants and other businesses in limbo.

At least dogs are around to keep things from getting too awkward.
Coronavirus Life
Location: Martinsburg, WV, USA